I have finished porting my twitter logo thing to SVG.

This was very similar to the PHP generated GIF method, I created a small function that echoes the code for each string in the SVG format. I opted to use the twitter XML feed instead of JSON as the number of requests will be higher as it does not cache any generated output.

Chrome/Safari work perfectly
Firefox is without animation
IE6-8 do not display without this installed: http://www.adobe.com/svg/viewer/install/ but with it work perfectly.

I have finally ported my twitter feed rotating logo thing into flash. So far it has been made in Processing, php GD generated GIF and flash and attempted in inconsistent HTML-CSS-JS. I have not yet decided what format to try to port to next, HTML5 canvas looks like a dead end for now based on what I have managed to find out and processing.js has some way to go till it supports all the necessary functions.

I have chosen to port this to various formats as practice of different languages without having to redo the core logic of the code that is to import the string, divide the string into each letter, measure the width of each for correct kerning, calculate the position and rotation around the circle, draw the character. This allows me to focus on the differences between the languages themselves.

I may release the source for some of these at some point in the future.

In my spare time I build computers for people, self building allows you to get the best performing parts with your budget.

This is the list of the components for the last computer I built and I would recommend them to anyone building a computer with a £700 budget. 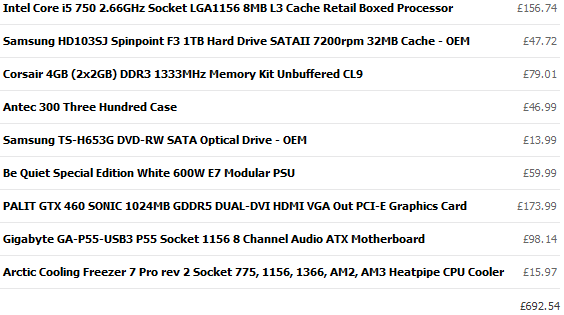