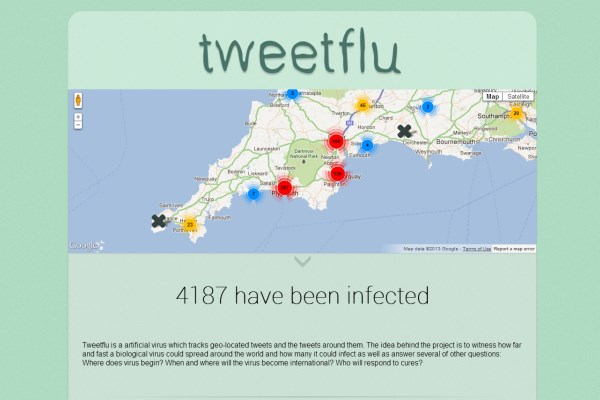 Mind’s Eye was a very technically challenging project to complete. We started with an general understanding of some of the core principles that would be fundamental but we had a long way to go.

As the main programmer of the group I focused on these problems, here is an overview of the main challenges that we faced.

One of the technical challenges we had to face was to run the same visualisation across all displays and computers. Fortunately random numbers in computing are not random at all, just pseudo-random and therefore predictable and repeatable. Random number generators tend to use a ‘seed’ value which acts as the starting point for the numbers generated. Some of these generators let you set the seed value and so providing all the clients fetched the same number of random numbers, they will result in the same sequence. By sending the same seeds to the clients and having the clients run the same code the random effects generated will be identical. We set the seed to the pitch of the sound being visualised which had a good effect.

Another problem was that if the framerate of one of the clients dropped, it would fall behind the others. Because the position is updated each frame a client dropping frames like this the particles would appear to be moving more slowly. Processing provides a variable called ‘frameRate’ which is the number of frames per second. This variable is calculated over a number of frames so if the framerate has dropped it is already too late to do anything about it. We could raise the target framerate to catch up but it would be likely that since it’s currently struggling to reach the existing framerate it could be a while before it would be possible to catch up so there would still be significant jumping.

The way around this is to separate the code for controlling the position and the code for drawing it and not drawing anything when the frame rate is low. This leads to another problem of flickering. The frames actually drawn are all correct and the particles are moving at the correct speeds but we needed a way to avoid this. The solution was to create a timer each frame then only draw particles if they fall within the available time budget for the frame, this way only some particles will be skipped and the position calculations can carry on at 30 frames per second.

To display on multiple computers we needed to share data via a network connection. To achieve this we had two options. The first was to send data for each particle between the computers, the problem with this is that we wanted a large number of particles to be displayed at once and this would create significant network traffic between them. The other solution was to make use of the random seeds and only send a message for each ‘event’ and let each computer work out where the particles should be.

Originally we used IBM’s MQTT but having been designed for robust, high latency messaging we found it too slow for our purpose of visualising live sound at least with the implementations available to us. Instead we opted to use processing’s net library to send events via TCP. The alternative would have been to use UDP which is faster but unlike TCP it is not as reliable and does not ensure delivery. Each message was made up of a serialised JSON object containing various properties for the event including pitch, amplitude, it’s position in virtual space and an unique identification for the client.

In this visualisation we needed to run different bits of code at different intervals and keep track of the age of things so a timer object would be necessary. In processing we can use the default Java timers based on the system clock however since it had to run completely identically to other clients even a small framerate delay could seriously impact the timing and cause it to desynchronise. So the only way to ensure that it was entirely deterministic was to count the number of frames and work from that.

To detect sound we used the Minim library and its FFT class. We detect the pitch with the highest amplitude and add it to an array of a tweak-able length, this smooths the output. At a regular interval it checks if it has exceeded a threshold and if it has then create an event based from it.

For the visualisation to be effective effects had to be displayed as close to the source of the sound as possible. To do this the clients send their detected sound events to a central server which compares incoming events against each other and attempts to find cases where the pitch matches, assuming that two sounds at the same time and same pitch have the same source. It then uses the amplitude of the the two sound events with linear interpolation to determine the position between them. The server then removes the original events that matched from an array and adds a new one with the calculated position. After all of this it cycles through the events and broadcasts them to the clients.

Mapping the Virtual to the Physical

To map the virtual space to the physical and allow the natural movement of things from one screen to another there were a number of challenges.

Before even working on cross screen support we first worked on cross window support as for full portability it had to be possible to run the client in a window also allowing for multiple clients to run on a single computer. The sketch makes use of the scale and translate functions to zoom in and show the correct portion of the full virtual space.

For mapping multiple different physical screens to the virtual space the sketch has to first calculate the pixel density of the screen, unfortunately this isn’t possible to find out in software reliably. To work around this the user must set the diagonal size of the screen in inches, inches are used for this just because screens are still most commonly measured in them. The screen’s aspect ratio is calculated from its resolution and with the monitor size the physical width and height of the monitor and then the pixel density can be calculated. With the pixel density the sketch scales so that everything is the same physical size independent of display. Along with this the user must also set the screen’s offset from another which is measured in metres and the microphone offsets for determining the source of the sound relative to the screen. Out of this came a scale of 10 pixels per centimetre.

Tying it back into physical space in this way had some strange effects such as it being possible to measure network delay in centimetres. It is strange that we seem to have disconnected from physical dimensions in computer interfaces and environments.