It’s taken a while but I’ve finally gotten around to doing the wiring for the relay array. This involved striping and tinning wires to stop them fraying in the screw terminals. The wires I am using are much higher gauge than they really need to be for the 12V 2A maximum going through them. 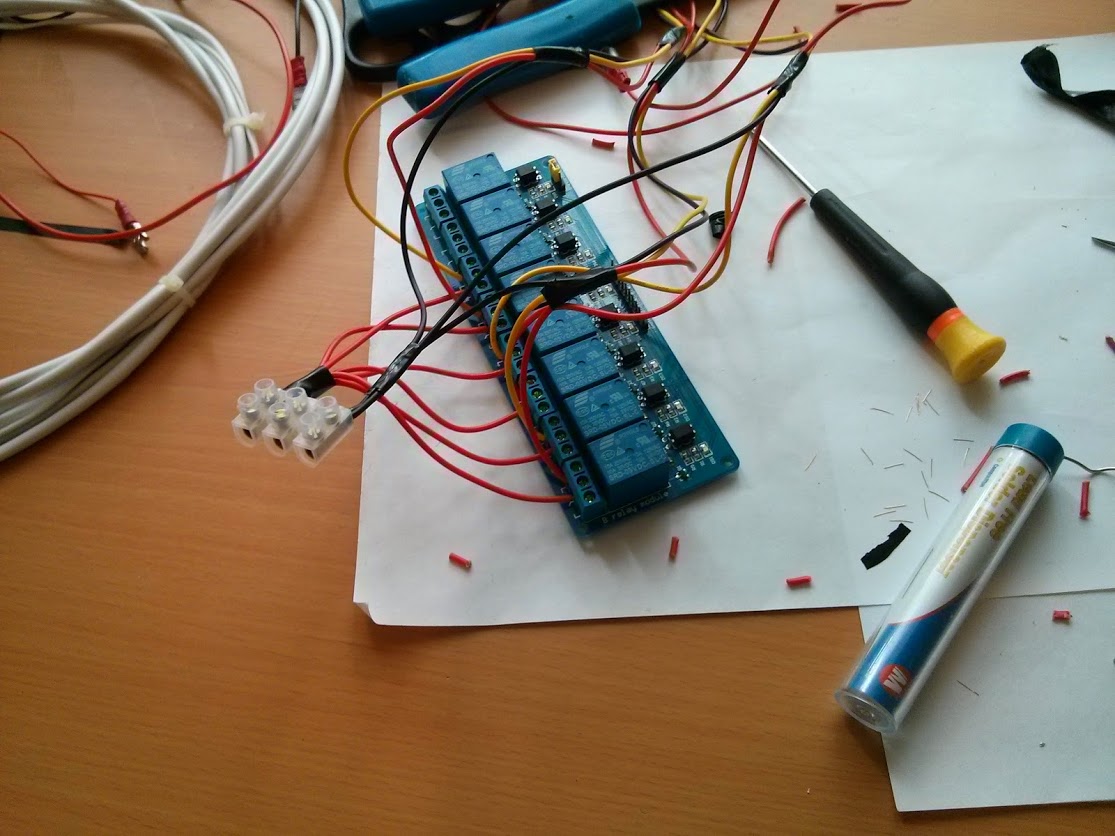 The original pumps I used had spade connectors but unfortunately the self priming ones I have don’t so I’ll be getting some when I get the chance, I want to make it easy to swap out parts and avoid having anything soldered when it doesn’t need to be. I’ve also connected a pair long wires to the main power terminal to take it to the external power supply. 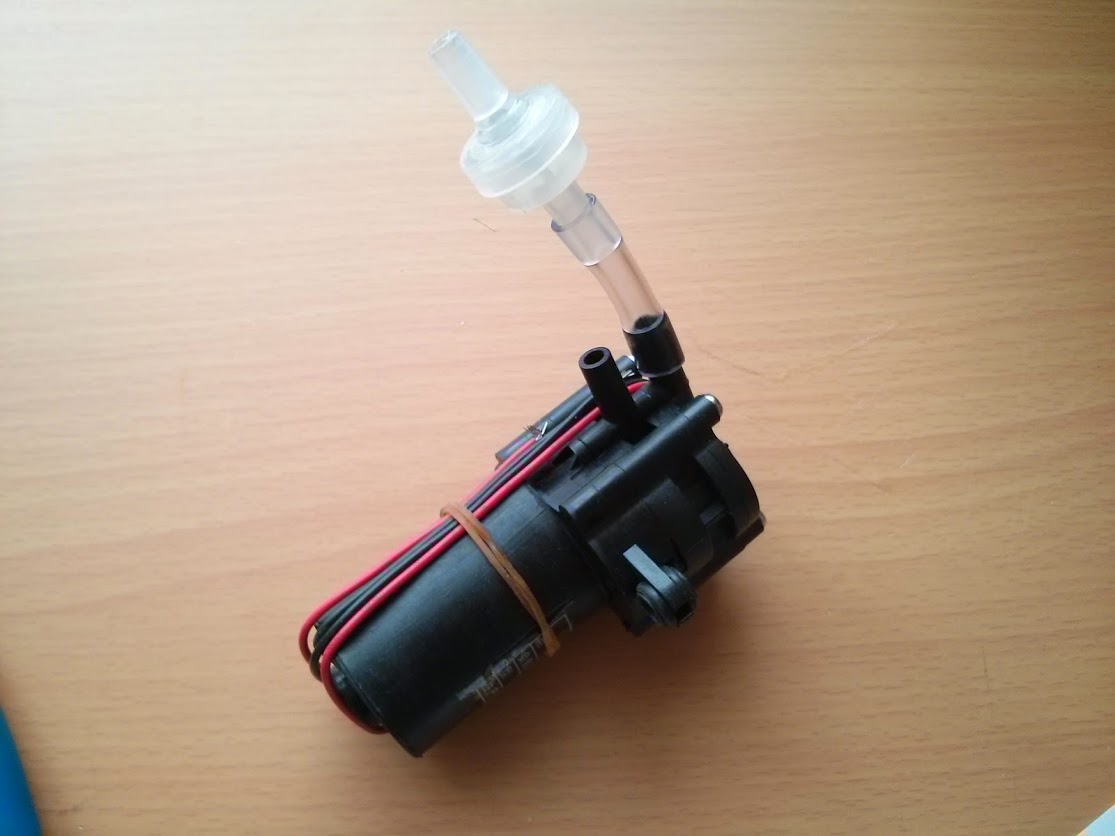 The valves appear to do what I want and have been attached to the pumps, I’ve placed them before the intake so that water remains in the pump and means it doesn’t have to self prime but can when it’s first turned on. 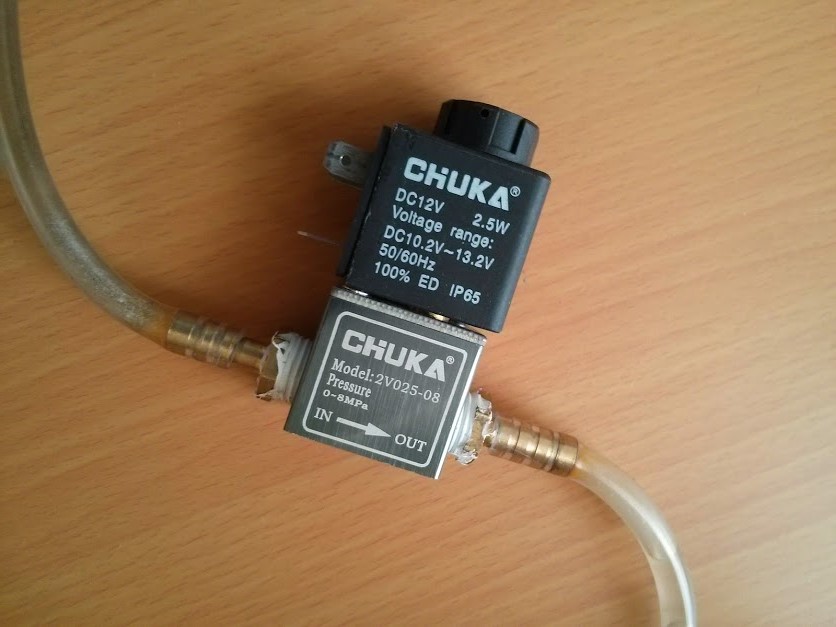 I checked my solenoid valves and found that they still had water in them after a year and that the hose fittings had corroded slightly and stained the tubes. I drained them and thankfully they still worked. I’ll have to make sure I remove all the water from it when it is not in use.

After getting and fitting the spade connectors my next concern is with the plumbing and how to make the most of the space provided by getting rid of the hand primer pumps and how to wire the three pressure sensors. I’ll probably also have a look if there is now a better way to send control signals to the Arduino from the net.

The first complete Canute which was presented as my final year project made use of ultrasonic range-finders to detect the water levels in each reservoir and therefore infer that whatever water wasn’t in the reservoir must be in the tube. This worked to a point but since it was only measuring over a 10cm range in the reservoir and the range-finder was only accurate to 0.5cm there were only 20 points along the display tube which it would come to rest. Additionally the ultrasonic range-finders were sensitive to water droplets on the mesh in front of the detector and contact with them and the internal shelf they were on made them temperamental. Another problem was that each of the electric pumps it used required manual priming with hand pumps. This was all manageable but it did require baby sitting.

For the degree show my project would have to be left alone for extended periods so I decided to use the week between the hand-in and the degree show to upgrade it to make use of water pressure sensors instead of the ultrasonic range-finders. I was pleased with their performance, however since I only had the two I had to wait till the day of the show opening to get the third and fully test the system.

Unfortunately something went wrong on the main relay board controlling the centre tube and something was causing the Arduino to restart, I had a spare Arduino which still crashed, the code had not changed significantly and nobody could identify the cause of the problem. It was a bit disappointing especially since it had been working. Canute was living up to its name, but it was still good to have it at the show, despite the problems.

Now there is nothing at stake I’ve began the process of redesigning the electronics and ordering new parts to get Canute working again. The plan this time involves self priming pumps which means I’ll no longer have to worry about pumps running dry or have to lift the tubes in order to prime them. Not having the hand primer pumps taking up room will also be helpful.

Instead of using the circuit boards I soldered myself I will use a prebuilt relay board and also include the Arduino inside the unit. Instead of the lab power supply I used before I’ll use a more compact laptop charger type one which might also be able to fit inside. Ideally I will also include an Ethernet shield so all you have to do is connect the unit to an internet connection and power and it could fetch tidal data that way.

Then of course it’ll be time to start Canute 2. 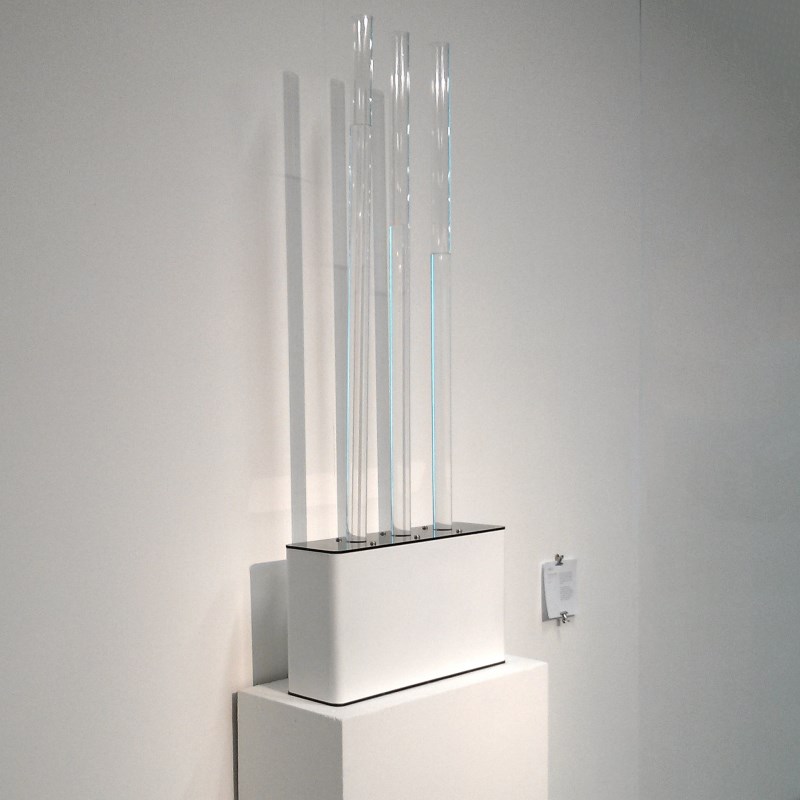 Canute on display at the degree show in the Roland Levinsky building at the University of Plymouth. 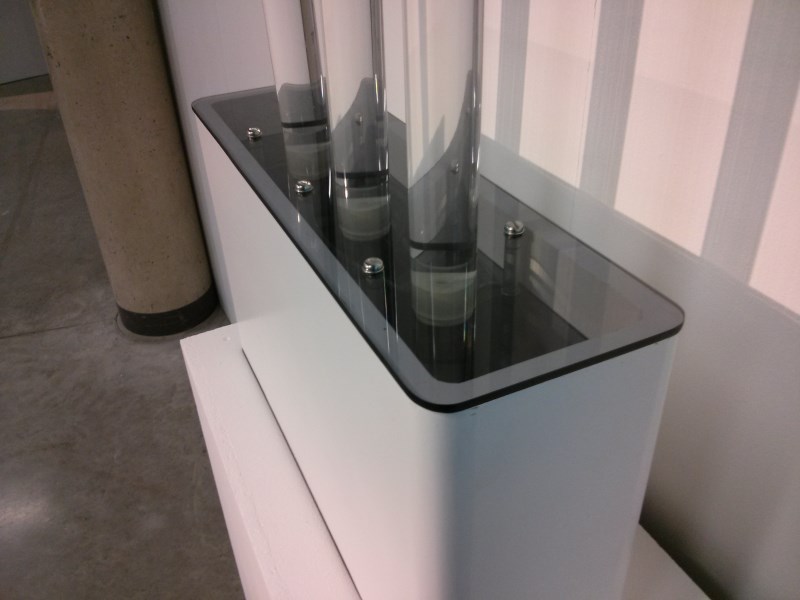 Information about other projects featured at the degree show can be found at http://datdegreeshow.co.uk/. 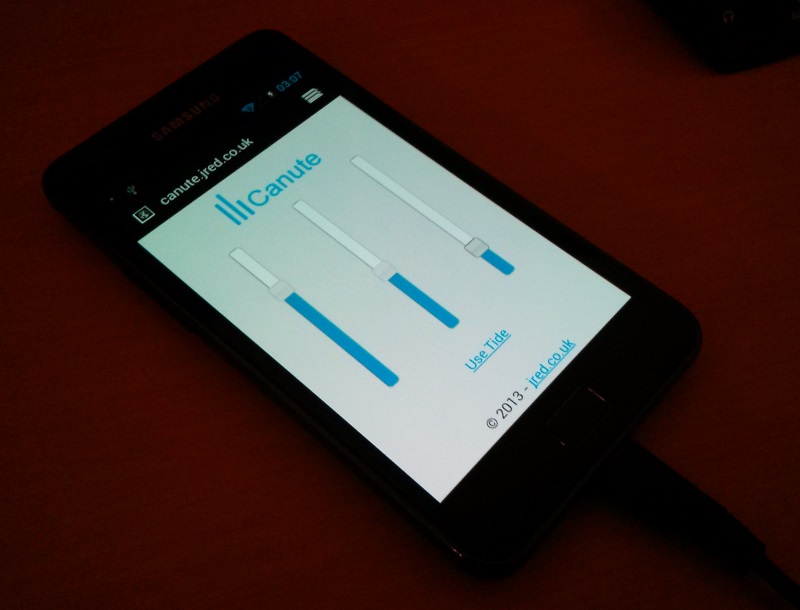 The web interface for controlling Canute. You can manually set the levels for each tube or let it visualise the tides. The website runs on my PHP framework. 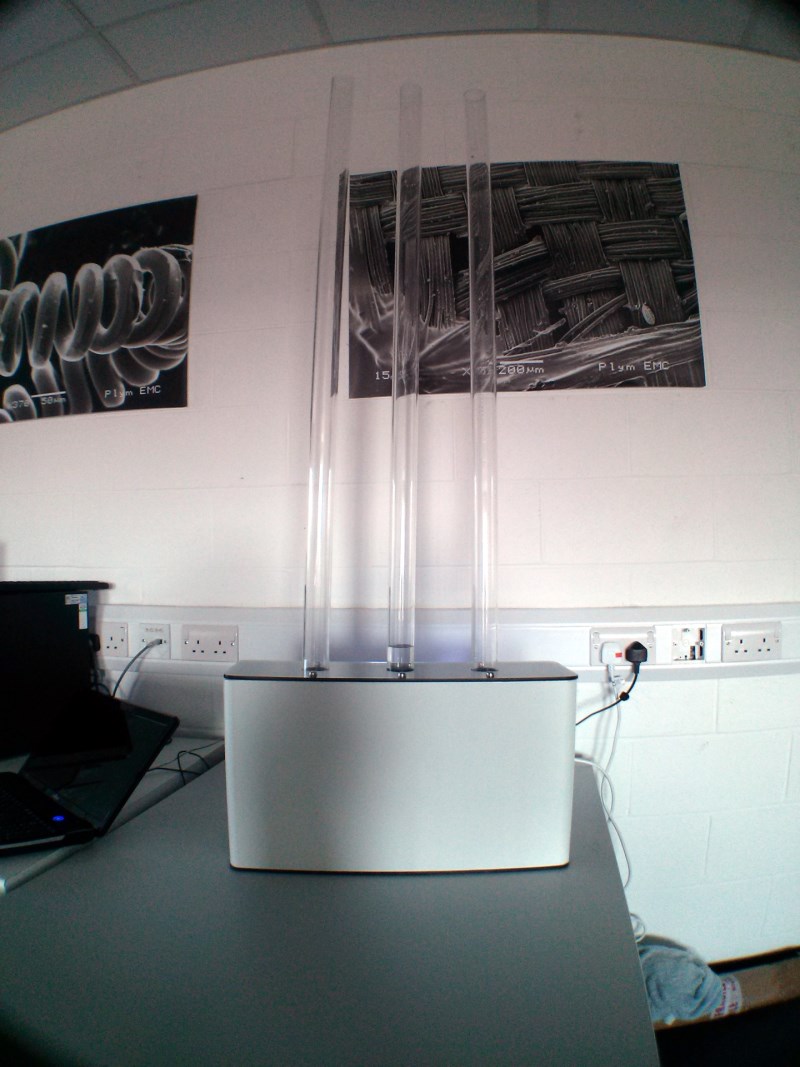 Canute is a machine for visualising the tide. It uses a set of pumps, valves and sensors to raise and lower the water levels in its three tubes. The tube on the left is one hour ago, on the right is one hour from now.

Canute can be described as an actualisation as it uses the same physical material it is representing as a medium. The project is part of collection of experiments in the recreation and translation of patterns of physical material in remote locations. 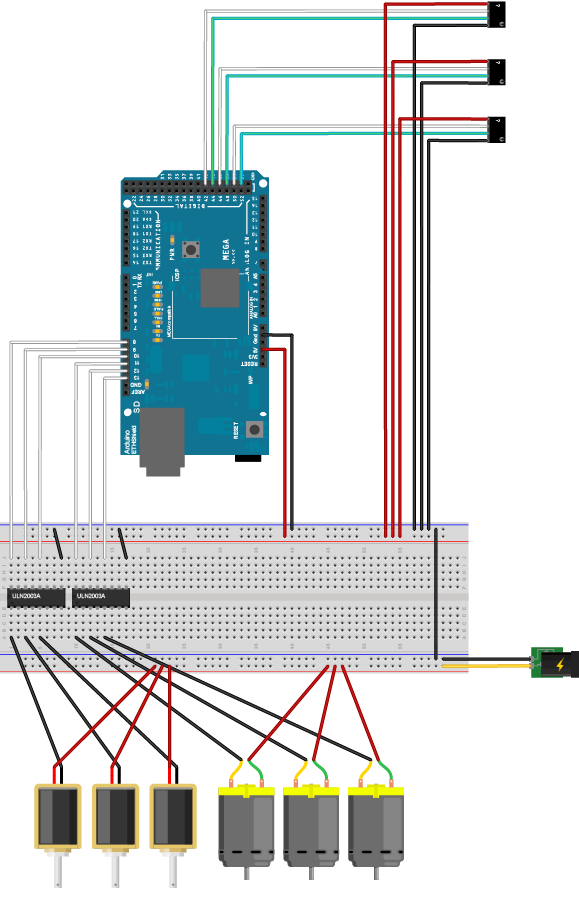 An early diagram of the wiring for the project. The ULN2003As were later replaced with relays which can safely handle more current. 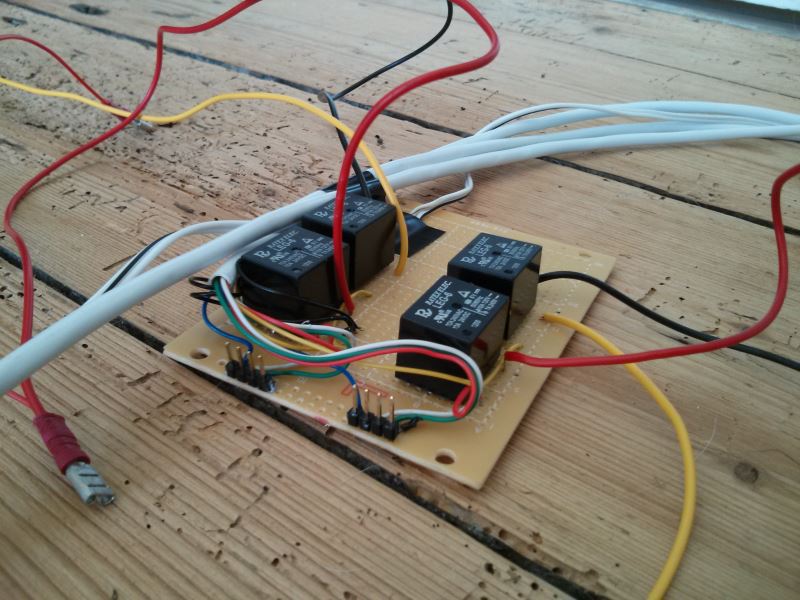 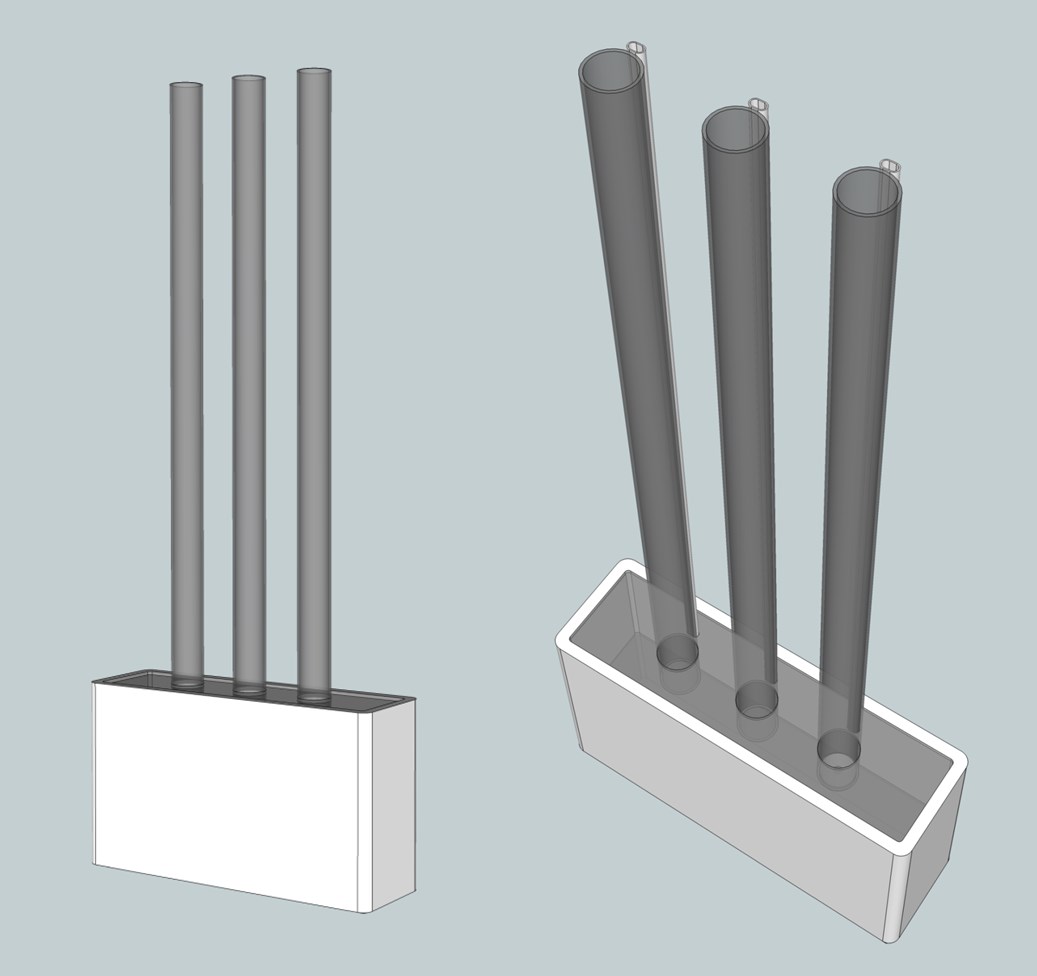 Exterior designs for the unit. 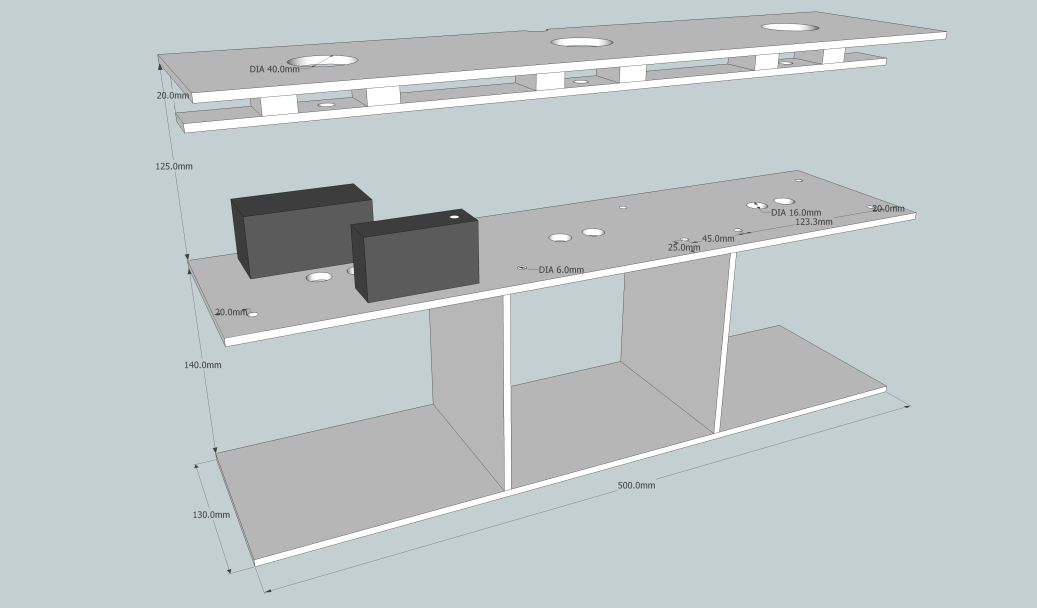 A plan with dimensions for the acrylic pieces to be cut.